In order to construct a theory, we must first build the frame to support that theory’s construction. Since the Reciprocal System is a theory that attempts to describe behavior in nature, the underlying framework is defined by the laws of nature.

Natural law is a nothing more than observations on the way nature behaves. Nature will always “do its own thing,” regardless of how mankind would like it to behave. Nature’s laws are static in that they always work the same way, regardless of how smart the observer is. By observing nature, we can codify the way it behaves using a number of different tools and techniques, such as mathematics, music, physics and chemistry. But once we do that, we have left natural law and created our own set of laws: man’s law.

Man’s law is a commandment on how things are to behave. And this applies to all fields, the laws of mathematics, the laws of physics or even the laws of civilization: civil laws. Man’s law is dynamic, in that it changes as man learns. However, due to influences of ego, those changes do not imply that man’s law actually becomes a better or closer approximation of nature—it can get far off-track!

A simple way to distinguish the two is to determine if a statement is an observation or a commandment:

Nature can be observed, but not commanded. Artificial realities are commandments, observed as “illusions.”

Let’s start with some basic observations of nature.

First, the minimum quantity you can have of anything is one. You cannot possess none of something, nor can you have a part of something, because the part, in itself, constitutes one part. This is the concept of a discrete unit. Even when you bust something into pieces, each piece is a discrete unit and a quantity of one. You can continue to break things apart until you reach an indivisible unit, the building block of nature we call the atom.

On the other hand, you can have more than one, but can never “have it all.” I can pick 10 apples from a tree, but I can never pick every apple in the Universe. The maximum quantity, though very large, is always finite. In the natural framework, there is no infinity. You either have it or you don’t, and if you have it, you have some finite amount of it. The natural framework is based on quantities (amounts or magnitudes). The quantity is represented symbolically by cardinal numbers, or scalar magnitudes.

Another observation is that the things in nature constantly change, yet remain the same. The atoms of a rock may break into dust, but the atoms are still atoms. Those same atoms can aggregate back into another rock, but the atoms are still atoms. The building blocks of nature remain constant but the arrangement of these building blocks constantly change. These building blocks, the content of the Universe, appear to have different properties than that of the container they are inside so we have two, apparently different “things,” that are inexorably joined yet separate, and that joining is dynamic: change. In nature, we can describe change as the relationship between the content and the container.

Natural quantities work like the Christian calender, where there is no “Year 0.” When you subtract a year from 1 AD, you end up at 1 BC. When you have a natural quantity of one, and you remove that one, you end up with “one missing”—a “-1”—and start counting in the downward direction. You can never have “none,” since, like the Christian calender, there is no concept of zero. 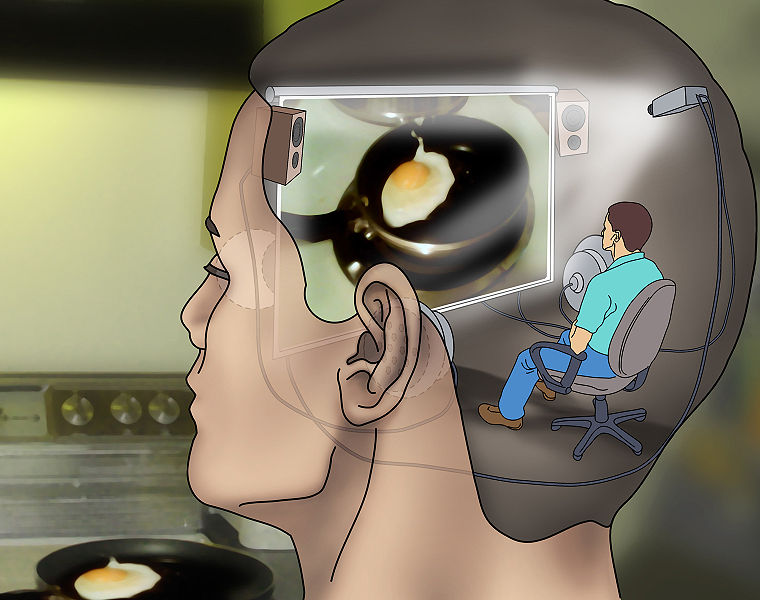 To understand the artificial reality created by man, one must understand a bit about psychology and consciousness, particularly the point of consciousness—that tiny person that sits in a chair behind your eyeballs with the joystick, driving your body around the world. Everything this guy sees is relative to him—he is the center of the Universe and everything extends outward. In order to deal with the external world, he needs a reality that includes the concept of himself as a center or zero. Zero, of course, does not exist in the natural world around him, so he designs a personal framework to include the concept—an artificial reality.

In the Mind’s Eye, everything is always relative to that point of consciousness, which views “amounts” as an ordered series—a measurement from itself, expressed symbolically through ordinal numbers: I’m first, you’re second, he’s third, she’s fourth, etc. Sequences are relative amounts. When we say something like “first in line,” there is an assumption that the line starts somewhere—a zero—and we are 1 unit from that zero.

If you have zero, you can have none, so what about “not none?” Here enters the other end of the measurement, that which goes beyond the natural ability of counting: infinity. The concept is straightforward: zero is the center and means “none.” Infinity is the extreme and means “all.” When someone says, “the Universe is infinite,” all they are saying is that “the Universe is all there is.” Nothing mystical about it!

All artificial realities are the product of human imagination and are unique to a natural person. That person (Einstein, Larson, whomever) then shares this “reality” with others and if accepted, forms a consensus. A theory is just an artificial reality that has been proposed for consensus.

Artificial consensus is product of socialization, namely education through coercion. You are informed that a particular artificial reality is the truth and if you do not accept it, you are going to stay where you are until you do. It is a necessary element of society that we all agree to certain social norms. However, most coerced consensus realities tend to expand in complexity and misunderstanding, until there is little resemblance to the natural reality it was originally derived from. Once a consensus reaches a point where it can no longer be observed in nature, then people start to challenge it and work to create a new consensus.

And this is not limited to science. It also applies to religion, metaphysics, politics, economics and any other “-ics” you care to mention.

Dewey Larson was a chemical engineer and his artificial reality was, of course, based on chemistry, namely observations of the periodicity of elements in nature, what we call the Periodic Table. He noticed that mass operated inversely to space through the concept of density, similar to the way time modifies space in the ratio of speed. However, the Periodic Table could not be explained with speeds unless this “time” denominator also had three dimensions, which was puzzling because time was always treated as a unidirectional scalar. While waiting at a stoplight, the thought hit him that space and time were just aspects of speed and possessed the same properties—if space was 3D then time was 3D and we only observed the net “push” of 3D time on space as a single, scalar variable. Larson created an artificial reality to explain the structure of the Periodic Table using the concept of speeds, and devised the theory that later became known as the Reciprocal System of physical theory.

The Reciprocal System of physical theory

Through the process of observing nature, Larson obtained enough information to construct a theory of a universe based on motion, a reciprocal relation of space to time. But unlike most theorists, rather than continuing on a deductive reasoning process observing nature and constructing more “man’s laws,” he switched to inductive reasoning to test his basic assumption on the reciprocal nature of space and time, by creating two postulates that describe the observations made and the assumptions going in to the artificial reality he was defining as a theory. From these postulates, Larson was able to create a theoretical universe from natural consequences and compare it to what is observed in Nature.

His first postulate is an observation, “Natural Law”:

The physical universe is composed of one component, motion, existing in three dimensions, in discrete units, and with two reciprocal aspects, space and time.1

His second postulate is commandment on the way things behave in his artificial reality, “Man’s Law”:

The physical universe conforms to the laws of ordinary, commutative mathematics, its primary magnitudes are absolute, and its geometry, Euclidean.

Here, Larson includes other artificial realities: that of the commutative subset of consensus mathematics and the consensus reality created by Euclid regarding geometry. If you notice, there are no observations here. Larson is laying down the law on how to interpret his artificial reality.

The primary magnitude clause is borrowed from Newton’s observation that “any object in motion tends to stay in motion, unless acted upon by a force.” Combining Newton’s observation with his own observation of speed as the sole component of the Universe, a constant magnitude of speed was required in order for the system to work. If speed varied, then the elements of the Periodic Table would bounce around, changing from one element to another as the speeds changed. This did not match observation—iron stays iron and doesn’t suddenly become aluminum, so the underlying magnitude, the primary one defining the structure, must be absolute.

This paper focused upon the basic nature of reality and how we create the world we choose to live in. It shows how Dewey B. Larson used the concepts of observation (natural law) and from that created an artificial reality that responds to his rules (man’s law), set to paper to create a theory known as the Reciprocal System of physical theory.

Larson’s theory has never gained consensus status, except as a conscious act between a few individuals. Even then, there are still many disagreements over the interpretation of Larson’s theory, because those involved to not have the same premises that Larson did while developing his artificial reality.

In 1996, Professor KVK Nehru of India and Doctor Bruce Peret of these united States of America started a reevaluation of Larson’s work in hopes to clarify some of the contended points, which led to a second attempt to define a universe of motion, an improved artificial reality called RS2, that is on its way to “theory” status with these papers.

2 Originally, Larson referred to motion as space-time, but that led to confusion with conventional theory as well as his own use of “time-space,” to represent the region of extension space.