“They have not resulted from a search for the absolute truth, whatever that may be, but from an effort to establish a working basis by which the ordinary phenomena of everyday life could be explained qualitatively and quantitatively.”

Over the course of the development of the Reciprocal System, Dewey Larson has updated his fundamental postulates a number of times. Prior to the 1959 publication of The Structure of the Physical Universe, his working postulates were:

Larson also included some “Laws” to clarify the Postulates:

After consideration, Larson dropped the third postulate as unnecessary:

“In the early stages of this investigation the scalar nature of space-time was embodied in an additional postulate. Further study indicated that it was a necessary consequence of the previous assumptions, as indicated in the preceding paragraph, and it was therefore eliminated from the list of postulates.”2

He also dropped the General Laws as being a natural consequence of the Fundamental Postulates.

The first version of the Fundamental Postulates was in the 1959 publication, The Structure of the Physical Universe. Most notable is the absence of the concept of motion—Larson started with the concept of space-time, which was nothing more than a ratio of two scalars: a magnitude of space inversely related to a magnitude of time. In later works, he changed space-time to motion, which was the same concept—a ratio of absolute, scalar magnitudes.

1959 Fundamental Postulates (from Structure of the Physical Universe)

In the 1965 publication, New Light on Space and Time, Larson altered the 2nd postulate to include the “commutative” adjective to mathematics to counter the non-commutative mathematics becoming popular with Relativity theory of the time:

1965 Fundamental Postulates (from New Light on Space and Time)

It should be noted that the “commutative” adjective is a commandment on the artificial reality—not an observation of space-time.

In 1979, Larson revised the Fundamental Postulates yet again, moving away from the idea of “space-time” and substituting the concept of “motion,” because space-time had too many hard-core connotations with conventional scientists. He also changed “form” to “aspect” to minimize the idea that space and time had “form” when they were simply aspects of motion. He also qualified “magnitude” with “primary” in an attempt to clarify that there were two kinds of motion, one that operated independently as an absolute speed (primary) and another that was the result of the interaction of primary motions (secondary) and was variable:

1979 Fundamental Postulates (from Nothing But Motion)

Extending Beyond Space and Time

After researching biology and ethics, Larson discovered that his Fundamental Postulates did not apply to the universe described by these topics. Life, in many ways, acted exactly opposite to the way inanimate structure should and concepts such as “self sacrifice” remained totally outside the scope of his universe of motion.

To correct this, he began observations of the way biologic life and ethical behavior occurred in nature, and defined these observations in a set of four Metaphysical Postulates:

1995 Metaphysical Postulates (from Beyond Space and Time)

The book was an attempt to create a larger, more encompassing artificial reality that would include the physical universe, the biological universe and the ethical universe as subsets, which Larson defined as three, “Levels of Existence”:

Larson’s approach to creating artificial realities was unique in that his theories had a logical cut-off point defined by his levels of existence, sort of “discrete units of observation.” He did not try to force a cell to conform to chemical laws, but rather observed life in nature and from those observations attempted to define a separate artificial reality that he could then correlate with his other theories and connect them on common ground—that being the concept of motion.

Because space, time and motion all possess the same properties, namely discrete units and three dimensions, the situation arises that there are multiple artificial realities created using Larson’s commandments.

When we normalize time (reduce it to unity), we can make it a constant and end up with 3 dimensions of coordinate space and the constant of clock time. Larson refers to this as the “material sector” and is observable and measurable, but still an artificial reality that forms a consensus with our body’s physical senses.

Both of these artificial realities operate simultaneously, so we end up with 3 dimensions of space on the outside with constant clock time, and 3 dimensions of time on the inside, with constant clock space. In other words, these little unit-sized chunks of 3D time arranged on a 3D spatial grid. We call the chunks of 3D time, atoms, and the arrangement on the 3D grid, structure.

The diagram on the next page is an “entity-relationship” diagram, that shows how Larson’s postulates relate to each other, as natural (scalar) observations, artificial (coordinate) commandments, and the logic he used to connect the system together. 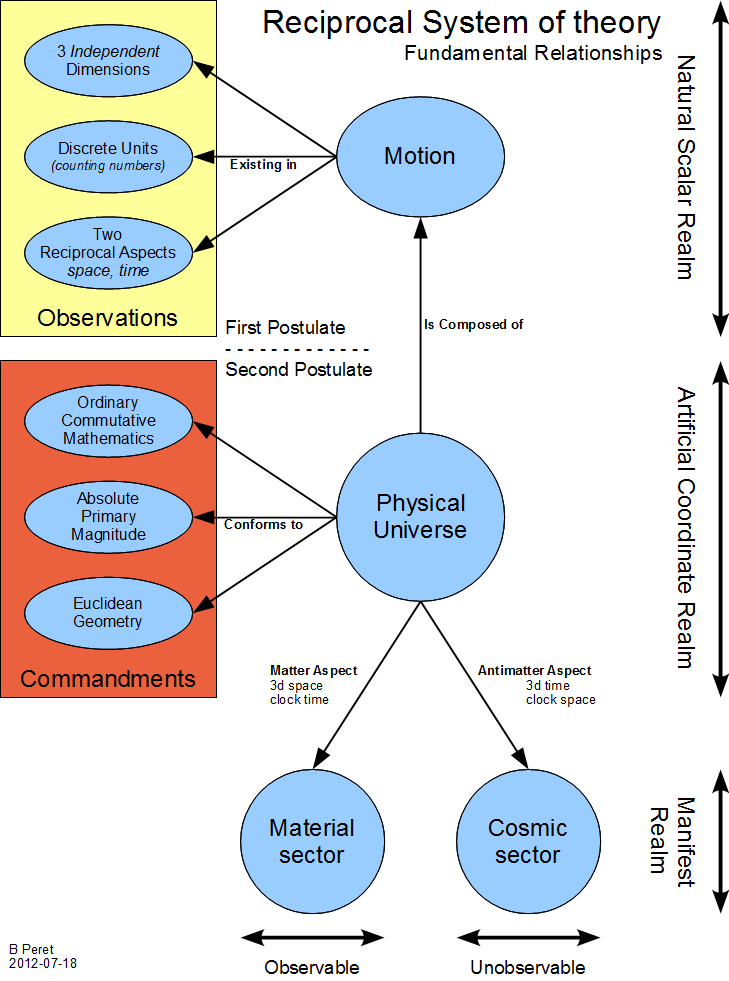 2 Larson, Dewey B., The Structure of the Physical Universe, p. 8.