The Tao of Larson

PDF: The Tao of Larson

When people first look at Larson’s publications concerning the Reciprocal System (RS), they find a conceptually different model from what they have been taught all their life and think it is something new and outrageous. But, when you take a detailed look at what Larson proposes for his theory, it is actually nothing more than an ancient philosophy—that of yin-yang—using modern, scientific terms. Yang is replaced by space and yin by time.

One of the elementary principles of yin-yang is that yin can never be separated from yang. Larson says the same thing, but with a more mathematical jargon: space and time are the aspects of the ratio of motion—you cannot have a ratio without BOTH a numerator and denominator.

A universe based on the concept of motion, is the Tao of Larson.

As an overview, let us make a comparison of the taijitu yin-yang symbol to the concepts that Larson uses in his universe of motion, described in the book, Nothing But Motion: 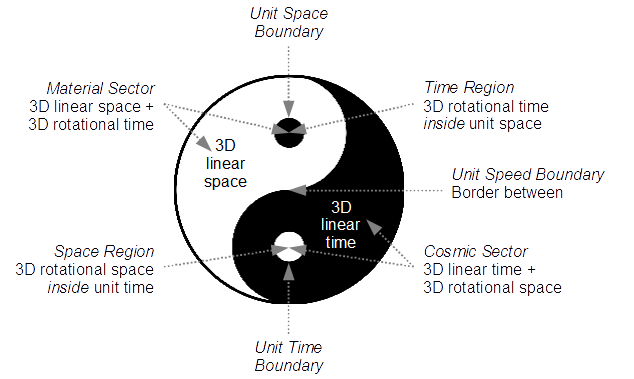 The yin-yang symbol has four distinct regions separated by three boundaries within its circle of completeness (7 parts). White customarily represents yang and equates to space, whereas yin is black, the reciprocal aspect of time. Just looking at the symbol, one can see both macroscopic and microscopic versions of these aspects interpenetrating each other.

Larson does exactly the same thing, four regions defining where motion takes place, contained by three boundaries, to create his “completeness” of the universe of motion.

The design, itself, indicates that the interaction between the two aspects (yin-yang, space/time) is dynamic and appears to be spinning—suggesting that the idea of rotational cycles are at the heart of everything. Scalar rotation defines all structure (particles and atoms) in the Reciprocal System.

Also, the boundary between yin-yang is not straight but curved like a wave, suggesting that when space and time rotate, waveforms are being produced (in much the same way that air and water interact to produce surface waves).

This unit speed boundary forms the reference speed from which ALL other speeds are measured, whether they be less than unity (sub-light speed) and part of the material sector, or greater than unity (faster-than-light speed) and part of the cosmic sector. Unity is the natural datum of the Reciprocal System—the end of the tape measure that you hook on things to determine distances. In the case of the Reciprocal System, this deviation from the speed of light is called a displacement from unit speed.

Splitting one, big empty universe up into two, empty halves of space and time does not really accomplish a lot, because neither half has any structure. This is where the other two boundaries come into play, with the smaller, opposite-aspect circles containing the aspects of yin and yang. When the microcosm of one aspect intrudes into the macrocosm of the other, something happens—we get structure in the form of photons, particles and atoms.

Larson expresses the differences between the macrocosm and microcosm as geometry, separated from each other by a spherical, unit boundary (circular on the 2D drawing of yin-yang).

When a yang (spatial) macrocosm contains a yin (temporal) microcosm, Larson calls that boundary the unit space boundary, because with a natural datum of unity, you cannot have less than 1 unit of space—but you can have more than 1 unit of time in the other aspect, so even though you can have more time in that region, you can only have a single unit of space. Hence, “unit space.” This is represented by the small, black yin circle within the larger, white region. This defines the structure of matter.

The opposite is also true; yin (temporal) macrocosm can contain yang (spatial) microcosm, separated by the unit time boundary; the small white circle in the larger, black field. This defines the structure of antimatter, or what Larson calls cosmic matter (c-matter).

In conclusion, the taijitu symbol is a complete description of a universe of motion. The little round, rotational microcosm contains bounded structure, present at a location in the translational macrocosm of the opposite aspect. Together, these four regions with three boundaries define the physical universe, by the Tao of Larson.